P. Northover
Research Laboratory for Archaeology and the History of Art, University of Oxford; Material Engineering, The Open University UK

In this brief report, the ongoing spatially resolved neutron texture analysis performed on several copper bolts used to fasten different wooden components of the hull’s structure recovered from the Deltebre I (1813) shipwreck is presented. This site corresponds to a transport ship of a combined British, Sicilian and Spanish fleet supervised by Lt. Gen. John Murray, which ran aground in the Ebro delta (Catalonia coast, western Mediterranean) after an unsuccessful expedition to liberate the city of Tarragona from the control of Napoleon’s troops. Since 2008, it has been the subject of archaeological study by the staff of the Catalan Centre for Underwater Archaeology of the Archaeological Museum of Catalonia. The research conducted has included surveying and recording the ship’s structure, and the excavation of the vessel’s whole cargo (Vivar et al. 2014, 2016). Previous metallurgical studies were conducted on different copper-base artifacts associated with the ship’s structure and cargo (Ciarlo 2015; Ciarlo et al. 2016).

The neutron diffraction experiments on structural copper bolts were performed on ENGIN-X (Santisteban et al. 2006), a time of flight (TOF) neutron diffractometer optimized for engineering measurements at the ISIS Facility, Rutherford Appleton Laboratory, UK. The full orientation distribution function (ODF) for selected locations across different samples were obtained by defining several incomplete experimental pole figures, using a novel data analysis strategy named NyRTex (Malamud et al. 2014). This approach was recently implemented in ENGIN-X and used to study the crystallographic texture at different positions across the section of copper bolts from the following identified shipwrecks: HMS Pomone (lost in 1811), HMS Impregnable (1799), HMS Amethyst (1811), and HMS Meander (1840) (Malamud et al. 2016, 2017). The results demonstrated the value of this technique in discriminating the manufacturing processes of different types of bolts without the need for intrusive sampling. This was an important step in increasing the understanding of the introduction of copper fastenings into Royal Navy warships. 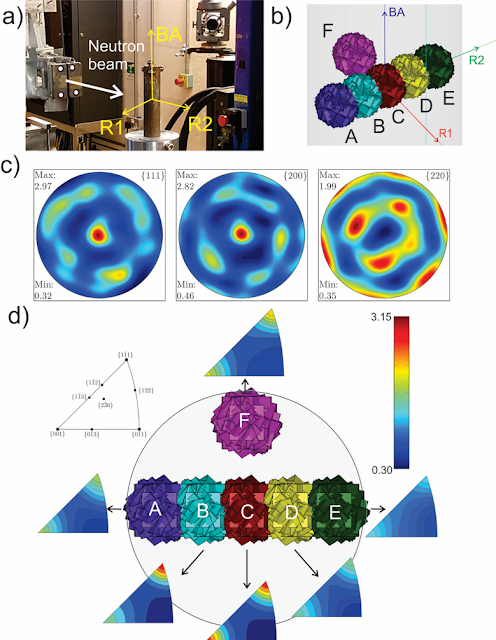 The neutron measurements were performed on two incomplete bolts, a stern knee bolt (180 mm long and 27.5 mm diameter, Figure 1-a) and a keelson bolt (265 mm long and 25.5 mm diameter) and three complete specimens: a rudder (pintle) nail/bolt (113 mm long and 16 mm diameter), a blunt bolt belonging to the hull planking (211 mm long and 22 mm diameter), and a sternpost bolt (443 mm long and 22 mm diameter). In all cases, we have defined the experimental pole figures for several locations across the samples cross sections: at the bolt centre, close to the surface, and between the centre and the outer zone. For each point neutron experiments were performed using an incident beam divergence of ≈ 0.7° x 0.8° (horizontal x vertical) and a 6 mm x 4mm x 4mm gauge volume. The explored positions on the stern knee bolt cross section are represented on Figure 1-b, showing the explored gauge volumes centered at each explored location within a macroscopic coordinate system composed by the bolt axis direction (BA) and two perpendicular radial directions (RD 1 and RD 2), arbitrarily defined. During the experiment, the bolt axis was placed vertically (as is shown on Figure 1-a), horizontally, and tilted to 30º and 60º from the vertical. For each bolt axis configuration several measurements were performed rotating the sample around the vertical instrument axis using a 3-axis goniometer controlled by SScanSS virtual laboratory control software (Nneji et al. 2016), with counting times of 12 minutes per orientation, which leads to a total of approximately 20 hrs per sample

The texture results for the central point of the stern knee bolt (position C) are shown in the recalculated pole figures of Figure 1-c. The refined ODF displays a marked double fibre texture: a strong -fibre with {111} planes parallel to the bolt axis direction and a minor <100> fibre component. Similar behavior was obtained for the other explored positions across the bolt cross sections, as is shown on the recalculated inverse pole figures in the bolt axis direction (BA) of Figure 1-d. This double fibre texture is similar to the one obtained for the HMS Pomone segment sample (Malamud et al. 2016) and the HMS Amethyst sample (Malamud et al. 2017) and identifies the bolt as having been made by the Collins’ process of drawing the bolt through a die. This particular crystallographic texture was also found on the keelson bolt, while the other analyzed specimens display a forged or a cast type textures, with the presence of some deformation, shear or recrystallization texture components. The texture results indicate that two methods were most likely used to manufacture the structural bolts from the Deltebre I site: forging and rolling. This heterogeneity could be related to the use of structural elements from different production centres, either at the time of the ship's construction and/or during a refitting, as well as with recycling practices (re-using scrapped bolts from other ships) in the Navy.