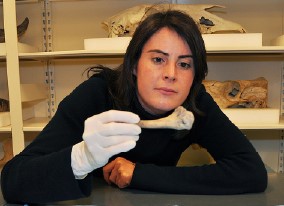 Camilla Speller is an Associate Professor at the Department of Anthropology, University of British Columbia, Vancouver, Canada. Her BA from the University of Calgary was a double major in archaeology and biological anthropology. During Speller's MA at Simon Fraser University, she developed skills in ancient DNA analysis and expanded this expertise for her PhD research. Her MA, completed in 2005, used ancient DNA analysis to examine the distribution of salmon species at the Northwest Plateau site of Keatley Creek, BC, Canada. Speller's PhD dissertation, also completed at Simon Fraser University in 2009, applied ancient DNA techniques to study the use of wild and domestic turkeys in the Southwest United States. In 2010, she was awarded a SSHRC postdoctoral fellowship to continue her research on North American turkey domestication at the University of Calgary, and helped to develop the new ancient DNA laboratory in the Department of Archaeology. In 2012, Speller joined the BioArCh Centre at the University of York, UK as a Marie Curie postdoctoral research fellow (EU-IIF) where she applied ZooMS and ancient DNA analysis to questions of historic whale exploitation. Speller became a Lecturer in Archaeology at the University of York in 2014 and led the ancient genetics group at BioArCh until 2018, when she joined the Department of Anthropology at UBC.