Representative on the Editorial Board of the Journal of Archaeological Science, and Past President - Rachel S. Popelka-Filcoff 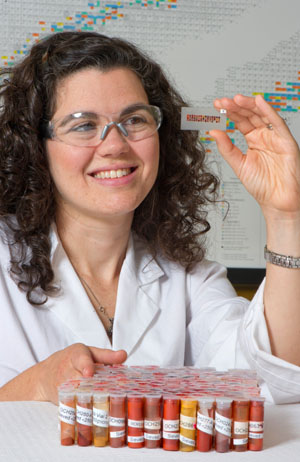 Rachel Popelka-Filcoff, Kimberley Foundation Minderoo Chair in Archaeological Science, School of Earth Sciences, The University of Melbourne, Victoria 3010, Australia, This email address is being protected from spambots. You need JavaScript enabled to view it.

Rachel Popelka-Filcoff (FRACI) is the Kimberley Foundation Minderoo Chair in Archaeological Science at the University of Melbourne, Australia. Her laboratory integrates advanced nuclear and spectroscopic approaches into multidisciplinary projects, including cultural heritage chemistry and archaeological science. Her research is the first comprehensive characterization of Australian Aboriginal natural mineral pigments on cultural heritage materials by several analytical methods. Rachel holds a BA from Washington University in St Louis a PhD in Chemistry from the University of Missouri as a National Science Foundation Research Fellow and completed a National Research Council postdoc at the National Institute of Standards and Technology (NIST). From 2009-2020, she was at Flinders University in Adelaide, including 2010-2016 where she was an AINSE Senior Research Fellow. Rachel has received awards for her research including the South Australian Tall Poppy of the Year in 2012, which recognizes the top early career researcher in the state. Rachel is the Past President of the Society for Archaeological Sciences, and on the editorial board of Journal of Archaeological Science. She is a Fellow of the Royal Australian Chemical Institute. She has had her research profiled in several scientific and general media outlets such as Cosmos Magazine, Chemistry in Australia, and Chemistry World, and radio and television interviews.

Editor for Journal of Archaeological Science