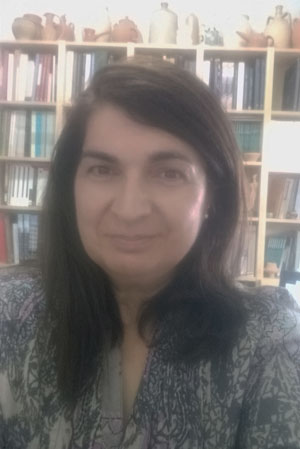 Evangelia Kiriatzi, Director of the Fitch Laboratory for Science-based Archaeology, The British School at Athens, Souidias 52, 10676 Athens, Greece. +30-2111022830; This email address is being protected from spambots. You need JavaScript enabled to view it.

Evangelia Kiriatzi is an archaeologist (BA, and PhD, Aristotle University of Thessaloniki) with training in archaeological science, and more specifically in ceramic analysis. She has held a number of long- and short-term posts in institutions mainly in Europe (UCL, University of Cambridge, University of Sheffield) but also North America (University of Cincinnati) and the Middle East (UCL-Qatar). Since 2001, Evangelia has been the director of the Fitch Laboratory, of the British School at Athens (https://www.bsa.ac.uk/about-us/fitch-laboratory), where she has developed new methodological approaches with increased emphasis on the landscape perspective and the multiscale investigation of technological processes through time to explore mainly human mobility and technological transfer.

She has coordinated more than 10 interdisciplinary projects, and produced over 70 publications, including monographs and articles in major peer-reviewed journals, having raised, both individually and in collaboration, more than 2m euros. Her research expands from Neolithic and Bronze Age Aegean and Anatolia, to Roman Italy, Punic Spain, early Medieval Britain and early Modern Aegean. Since 2010, Evangelia (together with Ruth Siddall, UCL) runs annually a very popular course on ceramic petrology that attracts postgraduates and senior researchers from institutions all over the world. She acts as reviewer regularly for a number of journals and funding bodies and has advised in setting up and equipping archaeological science laboratories in institutions in Europe, North America and the Middle East.